Accolades have been awarded to volunteers of North Oxfordshire’s hospital, health and wellbeing radio service, Radio Horton in recognition of their contribution and commitment over several years.

Certificates are awarded by the President of the Hospital Broadcasting Association (HBA), June Snowden for the first ten years of service then every subsequent five years and would usually be presented to at special member events or the charity’s Annual General Meeting (AGM). However, hampered by the coronavirus pandemic, Radio Horton committee members decided to personally deliver the long service certificates to volunteers’ doorsteps.

Celebrating twenty years at Radio Horton are members, Jane Holland and Ray Kent who both joined the organisation in the height of the millennium. Across the last two decades, they have both witnessed changes to the station, including technology, equipment and processes. They have also been party to special events including two Radio Horton anniversaries - its fortieth in 2004 where the station took to FM for a day, and its golden anniversary in 2014 when Radio Horton celebrated with special broadcasts from venues around Banbury town centre. In 2009, the station became a charity and also began broadcasting online.

Amongst presenting and ward visiting, Jane also prepares the annual request charts for Radio Horton, calculating the various song requests from listeners which is then broadcast on Radio Horton. Recalling her memories, Jane said: “I can't believe it is 20 years since my Aunty kept me the Radio Horton programme guide when she was a patient on F ward and I had a chat with [co-founder], Ted and became involved.”

“Owing to work commitments recently, I have not been as active as I once was but I really enjoy preparing the annual charts of all the songs requested over the year. I love spending my time visiting the wards, chatting with the patients and being able to connect the radio so they could hear their request and our programmes. I also enjoyed presenting and was very nervous thinking I could be heard around the world when we went to internet radio.”

Today an ‘Honorary Member’ of Radio Horton, Ray’s pleasure over the past two decades has been her happy and fulfilled time as a member of Radio Horton where she presented a Friday evening request programme for fifteen years until breaking her spine after a fall, followed by a major stroke six months later. However, Ray has spent the remaining years as a good friend of Radio Horton, and (in her own words) has kept the Horton Hospital busy.

When it comes to volunteering, Ray has one piece of important advice to others, “one receives more good things than one gives”.

Another Radio Horton volunteer, who marks fifteen years at the station next year, is Elizabeth MacLeod who has presented one of the station’s flagship news and current affairs programmes, Live At Three since 2006.

Elizabeth enthuses: “Radio Horton has been a very important part of my life after I retired from a full-time career in business and later as a Cherwell District Councillor. My programme ‘Live at Three’ gives me the chance to play a wide variety of music, talk about news and current affairs both local and National, and to carry out interviews both in the studio and over the phone”.

Elizabeth has interviewed a plethora of public figures and Members of Parliament over the years, organisers behind local events such as the Cornbury Music Festival and closer to home, stories from around the hospital and the Oxford University Hospitals NHS Foundation Trust.

“Notable interviews that I remember include our MP’s Sir Tony Baldry and the incumbent Victoria Prentis, and some years ago I spoke to Andy Burnham when he visited the Horton as a Labour Minister of Health. Previous Bishops of Oxford, and Buckingham have also broadcast live during my programme.”, adds Elizabeth.

Unfortunately, the COVID-19 (Coronavirus) pandemic has been a barrier to enabling Radio Horton volunteers to fulfil their presenting or ward visiting roles though it is hoped that they can resume once the situation improves.

President of the Hospital Broadcasting Association (HBA), June Snowden said: “I am always delighted to see how many wonderful, dedicated volunteers there are in our country who give so much time and dedication not only to their station but also to their community; It is so much more important to acknowledge that at this time, not only at Christmastime but in a year which we will always remember not necessarily for the right reasons.”

“Everyone deserves a medal for all the wonderful work they are doing and coming to terms with the virus which has changed the lives of so many."

“Well done Radio Horton that you have been able to present the much-deserved certificates to those who are due to receive them. It is great that you can overcome challenges and I only wish I could have been there to present them myself and to say the important THANK YOU to those recipients. Please keep up the wonderful work you are all doing.”

Speaking on behalf of the committee, Radio Horton Trustee, Bill Warren said: “Congratulations to our three volunteers for their loyalty, commitment and dedication to Radio Horton. These accolades demonstrate the positive impact of hospital, health and wellbeing radio - not only on the listeners and patients, but the sheer enjoyment and valuable skills that volunteering brings to our members. They are an inspiration to us all.” 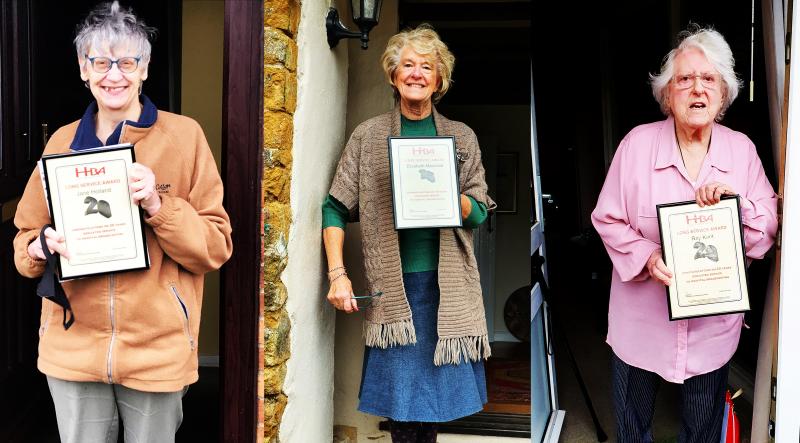