Victoria Radio Network celebrates 50 golden years of broadcasting in 2021, Elaine Bowie gives us an insight into the stations history.

Victoria Radio Network came about by the great love of the medium of radio by founder member Colin Johnston.

To cut a long story short the two of them joined forces with local DJ and freelance radio presenter Richard Park, and with a plan in mind they approached the East Fife Health Board (Fife Health Board) asking for support.

EFHB replied saying they liked the idea and after listening to a tape gave it “the green light” in principle, however there were two other groups interested as well so it made sense for all three groups to join together and pool their resources. This they did and the station became officially known as Victoria Radio Network.

VRN started life in 1971 in a cupboard in the occupational therapy department with engineers running the necessary cables up the tower block and down to the hospital main transmitter/amplifier in the basement, then back to the main radio equipment in the cupboard.

In these days the chairman of VRN was Richard Park, Colin was the programme director, Bob Liddell was in charge of outside Broadcasting, John Holton controlled news and features, Helen Mitchell acted as secretary, with Robert Johnston as Treasurer and Mr. A A Orr (EFHB) as the Hon. President.

On the 3rd of March 1971 the station went “on air” for the first of its permanent programmes with Colin Johnston presenting its first programme. Moving on to the day that VRN would outgrow its cupboard! In 1975 news came that the Anderson Trust had a flat in St. Clair Street which may have been available to VRN on a peppercorn rental basis, the network pursued the possibility and to cut a long story short, eventually decided to make the move.

With help from many sources including the friends of Victoria hospital money was found to convert the flat into a new studio. After 12 months of work the Network were the proud owners of a brand new studio complex. On a Monday in May 1976 the studio went on “air” Mr. A Christie, vice-chairman of the FHB, opened the studio and once again the first programme was hosted by Colin Johnston. All in all the St. Clare street days saw the network expand into a full-blooded radio station, with live commentaries from Raith Rovers matches , outside broadcasts from shopping centres and of course all which proved to be successful.

But, all good things come to an end… so did St Clare St. The announcement that a new road was to be built down St. Clare Street placed VRN in a precarious position and they moved in 1984 to two renovated portacabins located in the hospital grounds, one donated by Marks & Spencer and local firms stepped in to buy the other. VRN added to its capabilities by introducing a new mobile outside broadcasting unit. Built into a caravan, the unit included a fully equipped studio with recording facilities which allowed VRN to record events in the community. 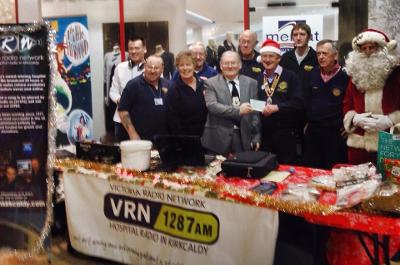 VRN’s final and last move in 1990 saw them relocate to their present position in a refurbished boiler house on hospital grounds where they still are to this day. The Chairman at this time was Chris Wraight and the station went from strength to strength winning many awards along the way. Hospital Radio has always been a starting point for young people interested in radio and has provided a springboard for their careers with many going on to greater things. The station is run by a volunteer committee of trustees and at this present time is chaired by Mark Sadgrove. There are 20 volunteers at this present time and we are always on the lookout for more members, not just presenters but people willing to fund raise, give clerical support and be request collectors in the hospital.

Over the years VRN has had many interesting successful members, including Richard Park Managing Director of Global Radio, Arthur Ballingall former manager of Radio Tay, Jackie Storrar Country and Western singer and broadcaster, Scott Davie- BBC Scotland Football Commentator, Laura Haldane- Scottish News Anchor for ITV’s Daybreak and John Murray who won Male Presenter of the Year in 2007 an award given by the Hospital Broadcasting Association.

Covid-19 restrictions  meant that the studio was closed to presenters, however, while restrictions were in place, presenters were broadcasting from home to ensure that provision was in place for patients in hospital to access hospital radio. I am now pleased to say that we are back in our Studio with safeguards in place.

The station has been grateful for support over the years from many sources which include local businesses, private individuals, Fife Health Board charity and the Big Lottery Community Fund to name but a few. Without public support the station would have been unable to continue as a hospital radio.