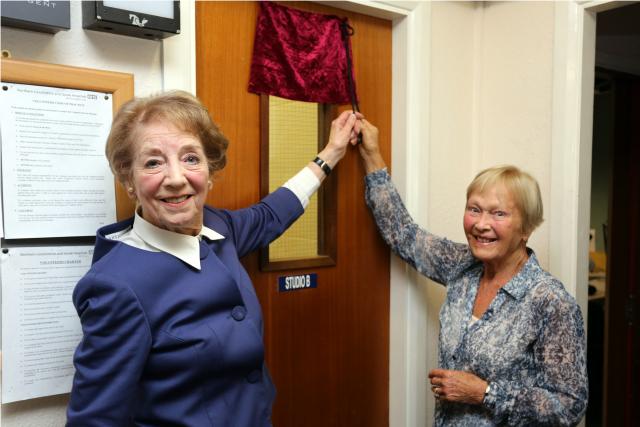 Two stalwarts of Scunthorpe Hospital Radio (SHR) have been remembered, with a studio at the station named in their honour.

Alan Ellis died last year – just months after his co-presenter Brian Tock also passed away.  The pair had been with the station since its early days.

As well as hosting individual shows, the two presenters became well known on the wards of Scunthorpe General for their Saturday morning Racing Ahead programme, in which they shared with patients their horse racing tips on that days televised race meetings.

Now, to ensure their contribution to the station is never forgotten, the studio they broadcast the programme from at the hospital, has been named the Racing Ahead Studio.

Both Alan and Brian’s widows Hazel Ellis and Margaret Tock attended a special unveiling ceremony, pulling the cord to reveal a plaque bearing the studios new name before then sitting in the seats their late husbands would have sat in, in the studio where many a racing tip was discussed.

SHR’s Sean Dunderdale was asked to say a few words before the unveiling. He said he believed the Racing Ahead Studio would do more than just remember the two men – but act as an inspiration for others:

“I hope that new volunteers joining the station will ask who Alan and Brian were and why the studio is so-called, and we’ll be able to explain how they managed to put together a popular programme, yet never forgot the listener they were talking too.  That’s why they only discussed the days televised racing, knowing patients could then watch the exact race on their TV later that afternoon and see how they did. They also understood the importance of Hospital Radio, from getting out on the wards collecting requests, to fundraising – standing in the street on a cold December day at the annual station bed push – to promoting the station at every opportunity.  I’d also like to think that one or two listeners might have phoned home on a Saturday and asked their family or friends to put a pound or two on one of the tips, and left hospital a little richer than when they arrived.”