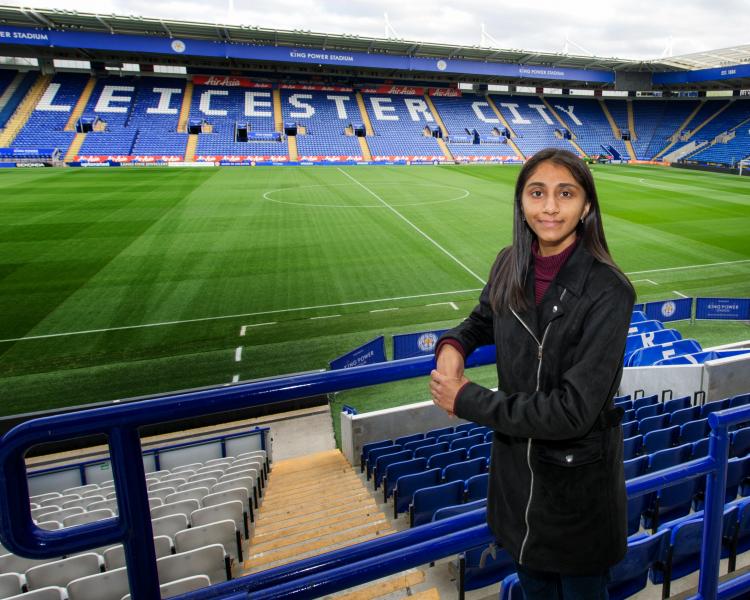 Renuka Odedra, 21, from Evington, provides live match reports from the King Power Stadium direct to Leicester General patients’ bedsides, alongside other volunteers, and also has her own sports show on the station on Friday mornings.

She was inspired to get into sports radio after speaking to former Match of the Day presenter Jacqui Oatley, and is now in the middle of her second year studying journalism at De Montfort University.

“I contacted Jacqui after coming home from Manchester Metropolitan University, where I studied Digital Media, and feeling unsure what my next step should be”, recalls Renuka. “She was so helpful, and told me she started her broadcast career in radio, so I started contacting local radio stations.”

Renuka spoke to Radio Gwendolen’s management and discovered the station was looking for a volunteer sports reporter, and following an interview and some trial runs she was covering matches from the ground while rubbing shoulders with professional sports journalists – sometimes literally.

“All the reporters from the different media sit together on the same bench watching the games,” says Renuka, “so it can be pretty hectic and loud, especially when City score!”

Renuka continues, “Looking at the sports journalism industry, there’s still not that many women represented, and certainly not many Asian women, so at first I found it a bit daunting, but there are lots of people to learn from and encourage me, and I’m picking up things about the industry all the time while sharpening my skills as a commentator and reporter.”

Ian Green, Station Manager at Hospital Radio Gwendolen, said, “We met with Renuka and immediately realised she had talent and wanted to learn while volunteering with us, so we trained her up and she is now one of our regular match day reporters. As well as providing a service to the patients and staff, hospital radio is a vital way for budding journalists to get into broadcasting.”

Radio Gwendolen is always looking for potential volunteers and donations. To listen to the station tune into 1287AM, or online at www.radiogwendolen.co.uk (match commentary is not provided online due to licencing restrictions).