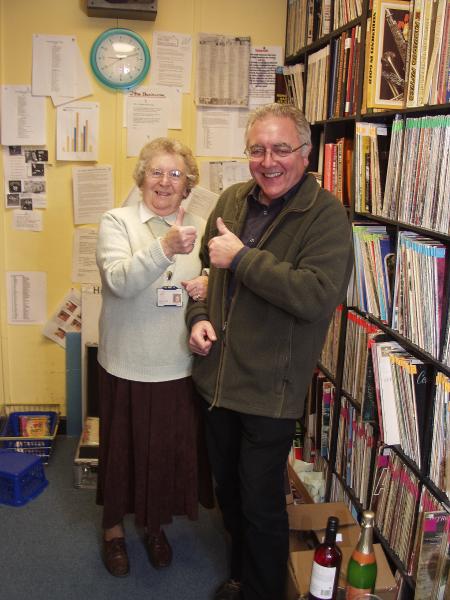 On Thursday May the 16th 2019 John Alborough celebrated 45 years with Hospital Radio Ipswich. Starting with the charity as a young whippersnapper he quickly became a stalwart of the organisation and has presented 'The Alborough Festival' on a Thursday evening for many years, accumulating a band of followers including a taxi driver in the Bronx who listens regularly on the web during his New York Lunch break!

John lives near the Suffolk Norfolk border giving himself a lengthy journey in to th Ipswich studios. A journey that he has failed to make due to bad weather remarkably few times. Although once he was forced to return home as a result of a blizzard and present his programme on the telephone with a colleague playing the music in the Ipswich Hospital studios for him.

Johns satisfaction with his length of service is shared by Gwenda Gibson who joined HRI two weeks before John and therefore is the organisations oldest serving member. At last years AGM of HRI Gwenda was voted as a life member for services given.

Between the two of them they will have clocked up 90 years and two weeks of service on May the 16th. John will be celebrating on his regular Thursday programme at 8pm on the 16th and will be joined by HRI members past & present. you can join in and hear what go's on www.hri.org.uk, or the TuneIn app.