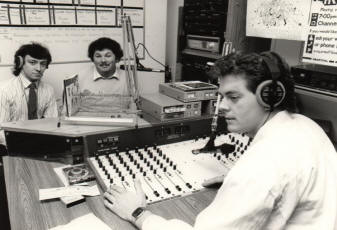 From our humble beginnings in 1974, Hospital Radio Exeter has gone from strength to strength and this year we will celebrate our 44th birthday. A meeting was held in August 1974 and chaired by local  policeman Terry Roberts who was a member of Plymouth Hospital Radio to find out if there was enough support to start a Hospital Radio Station in Exeter.

A dedicated team of people at the meeting offered their services to help make the stay of people in the local Hospital more bearable by visiting the patients then collecting and playing their requests and dedications.  So HRE (Hospital Radio Exeter) as it is fondly known was born and fundraising began.

Thankfully, we were supported by the League of Friends who donated £500 to buy our first mixer.

Our first broadcast from Hospital Radio Exeter was on 22 December 1974 which was transmitted by the use of BT Landlines to the RD&E Hospitals in Wonford and Heavitree, the Eye Infirmary and Princess Elizabeth Orthopaedic Hospitals were added later. From the original broom closet studios, our request shows were just 5 hours per week spread over two days, then  gradually adding extra hours and extra days (we now Broadcast 24/7).  The original studios suite contained just  one broadcast studio, a very small office and a library, all of which covered about 100 square feet.

When our new hospital was built in the early 1990s, it became clear that HRE would either have to move, or cease to exist, luckily the Hospital Trust agreed to locate us in the new premises and HRE moved to its current location, boasting two studios, an office, racks room, music library and a reception area. It was and still is a studio envied by many other hospitals in the country.

We also decided to renew the equipment and after a huge fundraising appeal, we were able to kit out the studio to an exceptionally high standard, with the purchase of new equipment, including 2 state-of-the-art “Alice Air 2000” mixing desks.

We also now have a second studio kittted out with a Studer digital mixer with editing facilities. HRE continues to broadcast 24 hours a day, 7 days a week with our daily request show and regular shows such as Sounds of the 70s, Country Scene, PopBack, the Breakfast Show, Essential 80s, Soultime and the weekly Sunday service live from our hospital chapel, all made possible by the team of 22 volunteers who generously give their time to research and present the shows.

2 of our team are original members who have been with HRE since 1974.